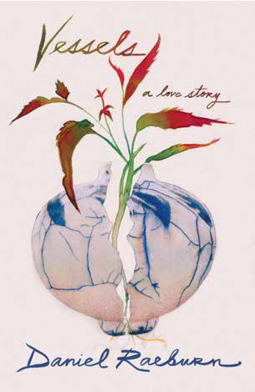 Summary:
An unforgettable portrait of a marriage tested to its limits.

When Dan, a writer with a passion for underground comics, and his wife Bekah, a potter dedicated to traditional Japanese ceramics, met through a mutual friend, they swiftly fell in love. “Of all the women I’ve ever met,” Dan told a friend, “she’s the first one who felt like family.” But at Christmas, as they prepared for the birth of their first child, tragedy struck.

Based on Daniel Raeburn’s acclaimed New Yorker essay, Vessels: A Love Story is the story of how he and Bekah clashed and clung to each other through a series of unsuccessful pregnancies before finally, joyfully, becoming parents. In prose as handsomely unadorned as his wife’s pottery, Raeburn recounts a marriage cemented by the same events that nearly broke it.

Vessels is an unflinching, enormously moving account of intimacy, endurance, and love.

Review:
Disclaimer – I recieved a free copy of this book in exhcanged for an honest review.

Raeburn’s memoir on dealing with death and greif was both raw and compelling. The language was beautiful and I was gripped by the honest portrait he paints about the other side of the loss of a child. With miscarriges and still births, the foucs is always on how the mother feels and not so much on the father’s loss. The thought process is generally that the father didn’t have to physically go through the experience, so their grief is often downplayed, or even not recognized as being valid.

I admit that I found myself thinking this when I read his memoir.

It wasn’t that I didn’t think his feelings were valid, per say, but that there is a selfishness to grieving and it might be better for someone to take the higher road and swallow some of their own pain so that they can be there for their partner. Of course, this isn’t fair. My aggrevation with some of what Raeburn thought or felt tained some of the chapters. But these feelings didn’t get in the way of my appreciation for his command of language, for his brutal honesty with himself about what he was going through. What I was hoping to see was someone who understood the immense pain their wife was going through and understand it, and be there for them in whatever way they needed.

But this book wasn’t about Beka. This was about Daniel’s experiences. It’s the other side to a miscarriage story. Maybe it’s not being shared in the right way, in the right light, but it’s honest. An honest portrayal of the difficulties of relationships after experiencing such beautiful and tragic moments, and trying to find ways to move forward.

Nicole is a writer, poet, book reviewer, and the founder/Editor-In-Chief of Magnolia Press. She started This Literary Life as a reading-as-a-writer project, but evolved into a place to share thoughts about books she loves, new and old.